This is my story

Many who know me know that I have a disability. 8 years ago, on January 28, 2011, I had a serious accident in an operation in Linz. How did that happen? Good question. Let’s jump back a little further.

May 2010: I finished my civil service and had the Matura in my pocket. What now? I asked myself this question every day. In the summer I worked for the community Gallneukirchen and for my uncle, with whom I built a warehouse. For fall 2010, I had no plans. Studying was out of the question, there simply was not enough money, my mother moved away, and my father hardly supported us financially. I love my parents and I do not want to give the impression that they were not there for me and my sister. Still, it was not an easy time. My sister started her psychology studies and works next to it. I got a job in Linz as a worker and was able to make quite good money through night shifts. After just a few weeks, it became clear that the work was only for a short time and I would definitely like to study in 2011. Unfortunately, at the end of January – less than half a year after joining the company – the accident happened. 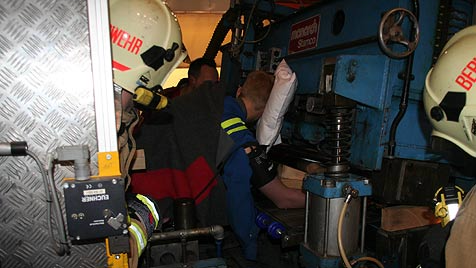 I had to clean a machine by hand, through which iron plates were transported. The machine had a fault that day and closed while my hand was trapped in it (as seen in picture). All fingers of my right hand were severed, and the skin was peeled off. Unfortunately, you could only save more dividers of my skin. For days, I did not know how my hand actually looks like and how many of my fingers are still there. Then came the news: no more fingers. Only after a few weeks I could see my hand during a bandage change. I’ll never forget that moment. And one thought has not been shaken off until today: Where have the remnants of my fingers actually been disposed of? The next steps were logical and meaningful for me at that time. First, I recovered and then the first skin graft was performed. After that a new recovery phase began. Agreed with the doctors, I got my first toes transplanted in early summer of 2011. In autumn 2011, the second toe followed. Then began a painful path of recovery and rehabilitation. In 2012, I worked again in the same company for a few months, until my studies (two semesters of psychology) began. It was not until 2013 when I started in Hagenberg and was able to find my way.

In all this time, I barely took the time to look after my inner scar. I did not take the time to emphasize my mental health. I never stopped to pause. I was so scared of what would happen if I stopped, that I worked like a beast, and finished bachelor’s and master’s degrees in 5 years. And then I stopped, and the storm caught up with me.

An event like this accident does not just go away like that. Through the shock and the months after, scars develop in the subconscious. 8 years later and I’m still struggling with my accident. Not on a physical level. I got along well with my disability. I still fight with my heart. With my subconscious and my fears. Fears that have arisen from my experience. And also, uncertainties that question me and my abilities. Why am I writing about it? 1) I find it interesting and 2) ask many people over and over again. I like to talk about it and also like to answer questions. But please do not pity me. I’m happy to be here, I love life with all its dark sides and I’m glad it all happened to me because otherwise I would not have become the person I am today. This is my story.